Cypress Park is going to be gentrified? 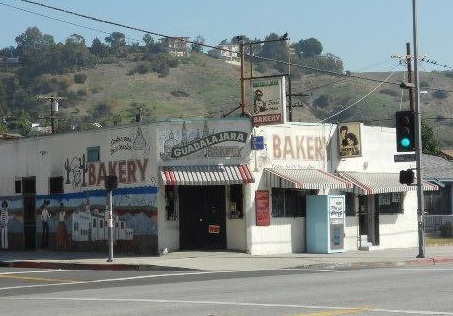 Do you know where Cypress Park is?  It is located in North East Los Angeles, between the Los Angeles River and Mount Washington.

According to Los Angeles Times, residents are 82% Latino, 5% White, 11% Asian. Most of them have less than high school education, and only 8.4% of 25 years old or older residents have 4 year college education. Median household income in 2008 was about $42,000/year.

Silverlake became “swanky”a long time ago, then Echo park followed the suits. The wave of gentrification jumped over Los Angeles River about 6-7 years ago at the height of the real estate boom. Mount Washington and Eagle rock became “upscale”, Glassel Park became “almost upscale” and even once notorious Highland Park became “hipsters’ central.”

Among all the craze, Cypress Park seemed to stay the same. Cypress Park is actually closer to Los Feliz and Silver lake than Highland Park and Eagle Rock , yet the neighborhood looked the same as 10 years ago. I thought Cypress Park is somehow untouchable. At least until about a year ago.

I first noticed the change when a house on Future Street was listed on June 10, 2011. To me, it was the first noticeable “flip” in Cypress Park. The run-down fixer upper was transformed into a stylish smoky blue home completed with a deck and a hobby room in the yard.  I was amazed to see many young professional looking people coming to its open house. The property was sold at $320,000, well above the normal sold price for a 846 SQFT house in the neighborhood.

It was quiet for a while, but then I notice more flips just recently. Completely remodeled house on Merced was listed at $389,000 and the status changed to “backup offer only” on April 27, 2012. “Super sweet craftsman bungalow” 1159 Isabel is listed at $349,000 (there were several flips on Isabel before this property since Isabel is the border line between Mt Washington and Cypress Park), 3343 Seymour, or “another fine renovation by a local builder” is now listed at $314,500. Above $300k houses are shooting up like bamboo shoots after rain!

I drove around the neighborhood for a while last week. I saw more than several houses are being renovated. I am sure they are coming up soon.

Will Cypress Park be finally gentrified like Highland Park around York and become another hipster central or will it defend its own hardcore character?

What do you think?

Just let you know that a gallery has already opened on Elm at Cypress (New Puppy Gallery).

P.S. Are you interested in buying in Cypress Park? Just let me know!

Yukari has continued to keep in touch long after I found the property.

Yukari was very helpful, supportive and honest. She responded quickly whenever I needed her help to analyze on a property I was interested in. She had also spent extra effort… Read more “Yukari has continued to keep in touch long after I found the property.”

She is the best agent in my experience

I would recommend her to everyone.

Yukari was very diligent about pointing out salient aspects of the
houses we looked at. She is smart about LA real estate market.
She was really good about… Read more “I would recommend her to everyone.”

Yukari is a hard-working person. When I bought a house 5 years
ago, she was my realtor. With her help, I bought a cozy and nice
house in… Read more “She knows how to show the property in the best way, knows how to negotiate buyer’s realtor”

We always felt very comfortable throughout the whole process.

Yukari was referred to me through friends and boy, am I glad to
have her on my side! We’re now proud first time home owners
because of her… Read more “We always felt very comfortable throughout the whole process.”

I´ve got an offer higher than my asking price

Yukari was an agent I chose because Web operation was very
polite, but I was successful and hit it. Heard my request and
dealt with it properly. Thanks… Read more “I´ve got an offer higher than my asking price”

She kept me inspired through the whole process.

Yukari Travis was my real estate agent during my lengthy search for a home. After thinking about it and saving for 30 years, the time finally came to take the… Read more “She kept me inspired through the whole process. “

She has knowledge of real estate and can receive accurate advice on target real estate market.

She has knowledge of real estate and can receive accurate
advice on target real estate market.
I would like to recommend it to people who are supported in

Hello-
Wanted to reach out and say how knowledgeable and wonderful Yukari Travis was during the recent sale of my home. She kept me and it all together and… Read more “She always had a clear and direct response to the difficulties we encountered”

I really recommend her to my friends

I never felt like I was getting the brush-off. Always kept me in the loop of what was going on.

We couldn’t have had a better experience

Yukari Travis was both professional and nice! She provided us
with thoughtful guidance of how to proceed with the steps of
selling my late parents’ home. We couldn’t… Read more “We couldn’t have had a better experience”

Yukari was not only very professional, but also friendly and incredibly dedicated to meeting my needs.

I chose Yukari because the first time I spoke with her, she
sounded very friendly. She is bilingual in Japanese and English
which was very helpful since I’m… Read more “Yukari was not only very professional, but also friendly and incredibly dedicated to meeting my needs.”

We would definitely recommend her to all of our friends that are interested in finding their home.

Yukari is very knowledgeable about the area, and extremely
patient. She was very punctual, often showing up well before we
did, and extremely patient with the amount of… Read more “We would definitely recommend her to all of our friends that are interested in finding their home.”

Yukari explained very clearly and so I did not have to worry anything about.

I had very good experience with Yukari Travis. This was my first
time, so I had no idea how or what to do but she explained very
clearly… Read more “Yukari explained very clearly and so I did not have to worry anything about.”

Working with you sell my property was amazing!

I would rank her as top 1% relater I have ever encountered in the past!!

Yukari has an extensive knowledge on our local area. She was
constantly looking into the new listing in order to provide us the
most updated market information. In… Read more “I would rank her as top 1% relater I have ever encountered in the past!!”

She is always very professional and works for agents literally 24/7!

Yukari is an amazing agent making purchase processed so easy
and smooth. She is always very professional and works for
agents literally 24/7!!
Testimonial Name and Suburb

You sent out about 200 letters to find a seller for us.